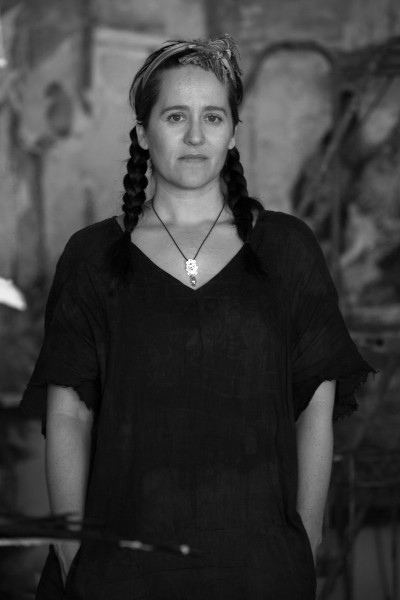 Hi. I’m Anja, a multi-disciplinary visual artist. In my art practice, I use history as a leitmotiv to question lineages of the transgenerational and the ecological – a quest to reinterpret cultural heritage.

Here is my confession: I am less interested in the theoretical and institutionalized questions of the contemporary art world than I am in interpreting direct experiences that contradict our conditioning. With first-hand experience we don’t see things as they are, but how we see them as we are.

If you have a passion like me for revealing the layers of the human collective, I invite you to view my work and read my journal.

The fading, decaying image of two women ritualistically joined at their mouths by bloodied threads, by Anja Marais, are beautiful and unnerving. Supporting the image are layers of worn, manipulated and torn paper that bring palpability to the alienation, suffering and pain of these two women.

Marais’ bold images reflect the inner psyche bleeding through external reality. She describes her work as a chronicle of the undertaken journey to wander between the two worlds while being a mirror to both. Her surfaces resemble roughly weathered posters, survivors of life’s events, yet still alive and vital.

Nancy Moyer for The Monitor 2018

“Far downtown in a former post office, visual artist Anja Marais’s installation Out of Sight; Out of Mind taps into the zeitgeist with large paste-up portraits of immigrants that play with dual perspectives, twisting sight to examine peripheral views of human history. Her images are pasted into corners and archways in the gutted downtown building, creating warped faces that recall distorted views of immigration and its role in history. Marais photographed Miami Haitians who are the children of immigrants. They sat for her portraits and posed as their immigrant ancestors, each holding a tool of their trade.”

… a haunting, site-specific installation, hung from the ceiling, from South-African born Anja Marais. As an immigrant herself, as so many are here, she creates pieces that relate to disenfranchised, disconnected communities. In the suspended ripped and torn panels, in black and white, you can discern a poor small farmhouse and fields. Unlike the collage from Mar which hangs behind it, Marais has created this work not by layering and applying, but by a process called décollage, where she manipulates the initial images by tearing and cutting it, also forming a new, unique perspective by elimination.

“Through the absence of bodies, Anja Marais expresses the dehumanizing shifts in identity experienced by refugees.”

Two installations leave a searing impression. One is a large photograph of a fallow field; in front of it are shoes — some of them lovely dress shoes — filled with dirt. Artist Anja Marais, an immigrant from South Africa, created the work in reference to the plight of Syrian refugees, who have fled with the shoes they wore on whatever day they ran, tripping through muddy fields in high heels. Adjacent is a sculpture of tattered furniture bundled together, left behind as the journey became more treacherous. Migrants are in a perpetual process of losing and reforming identities.

….The piece calls to mind old-world colonialism and immigration, which is echoed in Anja Marais’ installation “The Crossing,” where nine pairs of adult and children’s dress shoes filled with dirt sit next to an out-of-focus photograph of a muddy cornfield.

“When migrants are being forced out of their country to escape oppression, they have to pack your belongings hastily. You leave with the shoes on your feet,” Haden says. “It’s a dehumanizing process, these journeys from one world to another.”

“South Africa native and Miami-based artist Anja Marais has built a vaguely human-like sculpture, on which she projects images of sky and clouds. It is both eerie and transfixing, hard to describe without experiencing it” –

“The interior of West Martello Tower offered a sympathetic home to Anja Marais’s pair of suspended, tight-laced, full-skirted gowns.Constructed out of paper dress patterns and covered with drawings that illustrate an enigmatic folktale from Marais’s native South Africa, they suavely combined feminist and other political imagery.” –

“The Anja Marais film I could watch forever. The character’s body language, mainly her walk, keeps you wondering where she might be going and what is her intend. I could follow this character through the world wondering forever.”

“Marais draws upon her South African heritage and engages folklore with highly charged intellectual statements. Marais is most interested in describing simultaneity through her examinations of contradiction and synchronicity. She carefully explores the juxtapositions of human and animal, male and female, life and death, the physical and the metaphysical and weaves a story that is all encompassing in its eloquence.”

“The easy movement between the natural and supernatural is a basic assumption of African folklore. Marais uses non-traditional materials to celebrate a non- western cultural tradition. No wonder we stop and gape at these beautiful, exotic and momentarily disturbing shapes and images.”