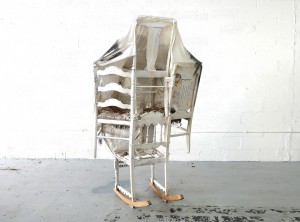 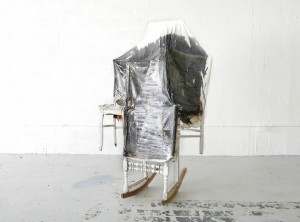 My  work got mentioned in the press for the “Intersectionality” exhibition curated by Richard Haden:

….The piece calls to mind old-world colonialism and immigration, which is echoed in Anja Marais’ installation “The Crossing,” where nine pairs of adult and children’s dress shoes filled with dirt sit next to an out-of-focus photograph of a muddy cornfield.

“When migrants are being forced out of their country to escape oppression, they have to pack your belongings hastily. You leave with the shoes on your feet,” Haden says. “It’s a dehumanizing process, these journeys from one world to another.”

By Anne Tschida for Miami Herald

Two installations leave a searing impression. One is a large photograph of a fallow field; in front of it are shoes — some of them lovely dress shoes — filled with dirt. Artist Anja Marais, an immigrant from South Africa, created the work in reference to the plight of Syrian refugees, who have fled with the shoes they wore on whatever day they ran, tripping through muddy fields in high heels. Adjacent is a sculpture of tattered furniture bundled together, left behind as the journey became more treacherous. Migrants are in a perpetual process of losing and reforming identities.

Read full article [HERE].
The exhibition is open until August 14th 2016
Today is #givemiamiday2020 and I hope you already

Waking up with a prayer in my heart alongside the

Stayed at one of the most haunted hotels in the St

As I am driving with Boulder Colorado fading in my

I finished over a 3000 mile passage from the Atlan

What do you think? Cancel reply

This site uses Akismet to reduce spam. Learn how your comment data is processed.

JOIN MY COMMUNITY
Welcome! By subscribing to my email list, you'll receive a quaterly email, about workshops, exhibitions, and projects. This newsletter might also include poetry, stories, reflections, and offerings.
I do no share emails. You can unsubscribe anytime.