This July I was in the inaugural group of artists invited to the Sedona Summer Art Colony in the foothills of Sedona’s Red Rocks. I arrived with a plan of how I would use this secluded month towards my upcoming art project. I had a Plan A, and if I had enough time I even had a Plan B. Needless to say these notions were out the window within 24 hours.

I got swallowed whole. The vast landscape squashed my ego, my importance, my mind. The openness unshrouded the sky, leaving my head vulnerable to the heavens. My lungs strained wider for the indifferent dry air. My pale soft body mocked by the ancient red rock formations. Stupendous decaying boulder teeth protruding out of the Earth’s skull. My identity dissolved into the abyss of the desert. Poof. 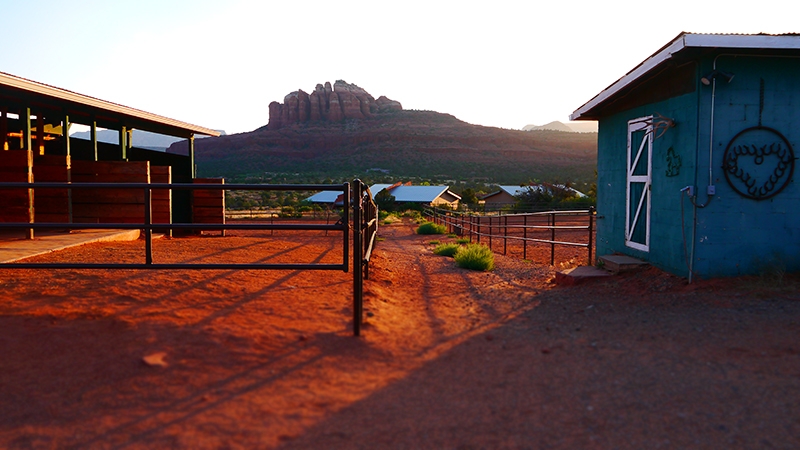 The Sedona Summer Art Colony was bursting with talent, ideas, and characters. Musicians, painters, poets, writers, dancers, performers, visual artists, and cultural managers. All hungry to share and shake hands. Pure unfiltered ideas spilled out of them onto the desert floor and eroded it with powerful possibilities. It made me feel strong, alive and insignificant. Not from insecurity at being in the midst of these talents. No, rendered insignificant by the power of the collective creative in its pure unadulterated form. Amazement filled me for the human being in its creative mode. My mind was swimming in harmony with a school of kindred minds. I have not felt this nondual and unpolarized for a long time. That was until the delivery of the package.

Splitting our hearts and minds.

In the middle of the night, the world left a subpoena on our front doorsteps. While we were blissful, the murdering of innocents happened. While we were listening to the moan of the violin, the dueling of the poets, the outside world was hemorrhaging all over the floor. Racism, sexism, fundamentalism, terrorism, zealots – humanity in his most undiluted hatred. Violence. This contrast polarizing our hearts and minds – splitting our songs, our poems, our paintings into fragments. The poets jumped onto the tables with crescendo tongue to open ear and eye demanding how can we allow treating the black man to be less than the white man. The performance artists brooded over altars and sulked in dark corners. The writers drank a bit more than usual and the music shifted to minor arrangements. Anger blanketed, rightfully so. 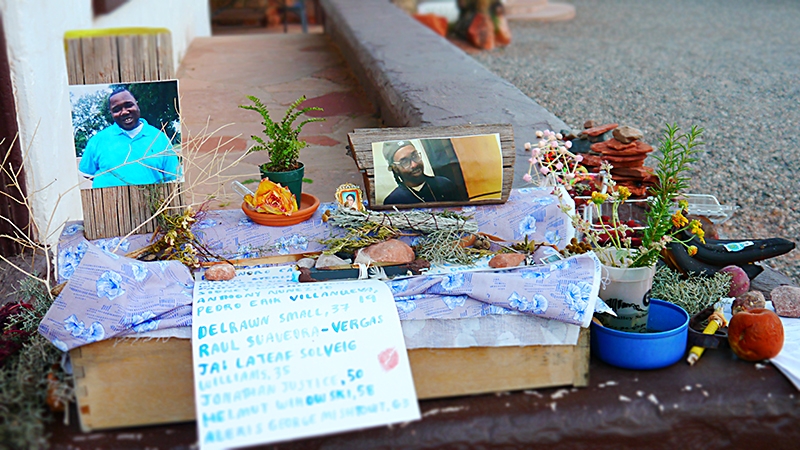 Summer colony altar for recent victims of violence in the United States.

My Sedona Summer Art Colony experience started to shift as well. Something strange happened to me. I could not stay in a nondual state, that would have been irresponsible, but I just could not join the polarized psyche either. I started sleeping poor, with many unnerving dreams turning into nightmares. I began to have out-of-body experiences. I saw my ten-year-old self in South Africa with its racism, its superiority complex, its heavy embroidered history. I became a spirit child that was half human and half dream. Surrounded by millions of people, each one that had ever lived in South Africa. Crowded and loud. Everybody was speaking at the same time wanting to be heard until I would bleed from my eardrums. 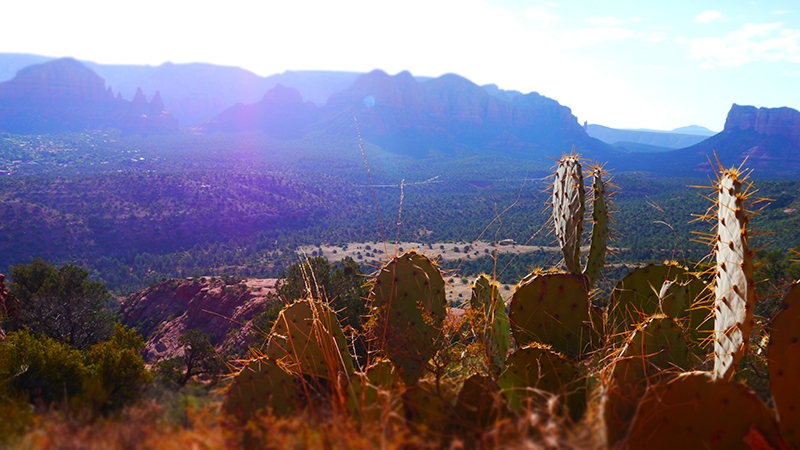 Today back home I am left with an intense want to be able to see this destructive train of duality and not to board it. Not to buy the ticket. In my art, it has been important for me to speak out against displacement, against creating outcasts. With these intentions, I recognized that I am still on this perpetual train of duality. As an artist, instead of being ‘against’ something or ‘for’ something how can you ‘be’? How can we break the dark cycle of human destruction without being part of it?

We are left with the lasting words of others who have gone before us and faced the same questions. I’m thinking particularly of the Nigerian novelist Ben Okri. I always have his book “A Way of Being Free” within reach.  In his essay “Redreaming the world” he talks about transcending the destructive cycle of humanity:

“The oppressed lives within the stomach of their oppressors. They need the thinking and the structure of their oppressors to transform their realities. The oppressors need the blood of the oppressed for the rejuvenation of their spirits. The spirits of all become weirder…It would appear that they [the oppressed] have to compete in this world, but not necessarily on the sullied terms of the world dominators. They have to fight for their places in the modern proscenium. They can no longer, it would seem, hold themselves down with rage about their historical past or their intolerable present. But they have to find the humility and the silence to transcend their rage, distill it into the highest creativity and use it to reveal the greater truths.” (1)

He gave us further guidance in his Steve Biko Memorial Lecture:

A similar message was conveyed by the philosopher Alan Watts, a believer in natural homeostasis (literally ‘standing still’ — describes the mechanisms by which all biological systems maintain stability):

“That some way or other the human race has to learn how to leave the world alone. The problem is that we do not know how to stop, we got something started and we see it is going in the wrong direction. There is an old Chinese saying that when the wrong man uses the right means, the right means work in the wrong way. In other words, there is something wrong with the way we think. It is shocking news for us and our human pride that we will only make a mess by putting things straight. When we stop, we will find a world that is happening rather than being done by and to us.”( (3) Watch the linked video for his full explanation of this complex yet simple thought or read his” The Book: On the Taboo Against Knowing Who You Are“)

Back in my studio.

Filled with the sublime of nature and the human condition I left the Sedona Summer Art Colony in a fog of dreams and questions.  How I will transcend my art making is yet to be seen, but this experience will definitely impact my studio practice in a positive way. Sedona Summer Art Colony flourished as a natural homeostasis where artists could find stability between exploring creativity and dealing with the harsh challenges of the outside world. 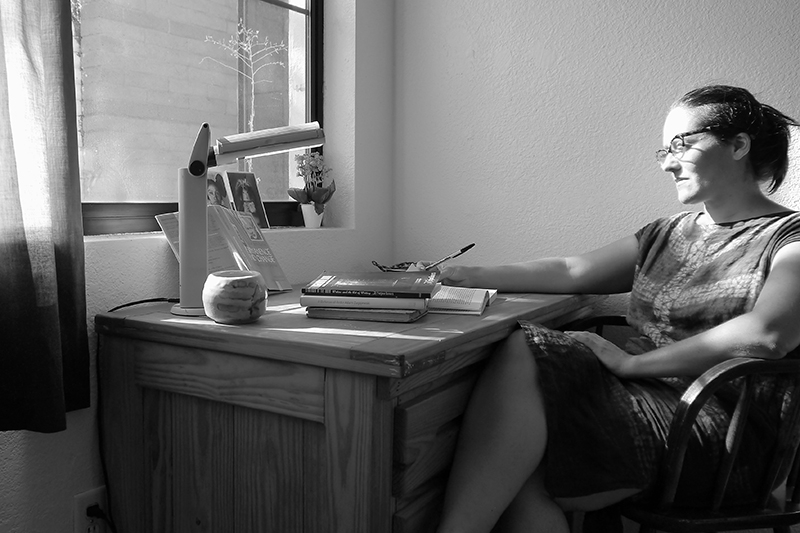 Working at the colony

Today is #givemiamiday2020 and I hope you already

Waking up with a prayer in my heart alongside the

Stayed at one of the most haunted hotels in the St

As I am driving with Boulder Colorado fading in my

I finished over a 3000 mile passage from the Atlan

What do you think? Cancel reply

This site uses Akismet to reduce spam. Learn how your comment data is processed.

JOIN MY COMMUNITY
Welcome! By subscribing to my email list, you'll receive a quaterly email, about workshops, exhibitions, and projects. This newsletter might also include poetry, stories, reflections, and offerings.
I do no share emails. You can unsubscribe anytime.